Unplugging electric devices saves money.  That is something I am sure we have all heard at some point, but how often do we actually do it? A large part of your expense when it comes to the energy bill can be from items that are not even being used. Certain appliances and electronics don’t fully shut down when you power them off; instead they enter standby mode.  This means that although something is turned off it is still using power. 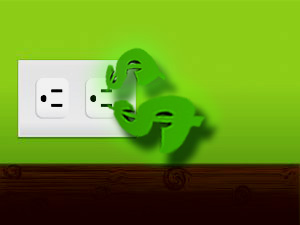 Known as energy vampires, these appliances for the most part do not serve a function, all the while slowly sucking energy from your home or office.  So, is it enough power to make an impact?  The answer is yes; energy vampires can consume as much as 15-30 watts per appliance.  Totaled up it is estimated to account for more than 5% of your power bill; that adds up to an average of $4 billion dollars across the U.S.  In the state of Ohio approximately $55-$100 per year could be saved by just switching off the unnecessary devices and cutting vampire power.

Beginning in the 1960s manufacturers started designing TVs with “instant on” technology.  Eliminating the warm up period most televisions previously needed, this began the trend towards standby power.  Some vampire electricity is necessary with today’s technology, without it we would not have the modern convenience of refrigerator temperature monitors, the easy use of remote controls or digital clocks.  However, there are certain devices that can be switched off completely to help save money and energy.

Below is an infographic showing how much energy common vampires use (source: GOOD Magazine).

With a high level of professionalism, customized options and personalized plans to fit every need and budget, HEITS is the leader in professional commercial maintenance services.